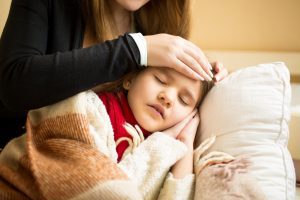 Working in childcare means you’ll more than likely come across children who are unwell from time to time, but a little knowledge can go a long way.

Learn how to identify an illness and find out the right steps to take care of the child – and how to prevent germs from spreading.

Chickenpox is caused by the varicella-zoster virus (VZR) and in most cases, results in an itchy rash, spotted skin and a fever. Both adults and children can become infected, though it’s more common (and less severe) in children.

There are a few theories on the use of the word ‘chicken’ in the name of the disease – one being the relative mildness of the disease.

The good news is that today, both children and adults can be vaccinated against chickenpox. Working in childcare there is a chance you may still come across the virus, so it’s good to know what to look for.

What to look for

For most healthy people who become infected, chickenpox is mild and recovery takes place with time and rest. Complications can occur in a small percentage of people and the disease generally impacts adults far worse than children. Those with compromised immune systems are at particular risk.

According to Better Health Victoria, the main symptoms of chickenpox include:

How to treat chickenpox

There’s no specific medication for chickenpox, though antiviral medication may be prescribed in severe cases. Instead, treatment of chickenpox usually involves relieving symptoms and preventing things from getting worse.

You might also consider putting mittens on particularly young children so that they cannot scratch and further aggravate their skin. Excess scratching can lead to infection as well as scarring.

Preventing chickenpox and spread of illness

Chickenpox is very easy to catch and in a childcare setting, this poses quite a challenge, so prompt action when symptoms arise is important.

Chickenpox is spread by either having direct contact with the infected person (including touching blisters) as well as breathing in airborne droplets from the upper respiratory tract of an infected person who coughs or sneezes.

An infected person is contagious for up to five days before the onset of the rash and remains infectious until their blisters form scabs.

In light of this, children who become infected should not be allowed back into childcare until their blisters have completely dried or faded. Children who feel unwell should be promptly separated from others and sent home as soon as possible – especially if there has already been a chickenpox outbreak.

Seek medical assistance if you have concerns

As with any illness, if you have concerns or don’t know what course of action is best for a particular situation, get in touch with a GP or nurse on call. In the case of symptoms that are severe or unmanageable, call 000.

Practical Outcomes’ early childhood courses cover hygiene and cleanliness in the workplace, equipping you with the skills and knowledge to help prevent and manage the outbreak of illnesses amongst children when working in childcare.